All men want to “get big” at some point in their lives.

Having a lot of muscle mass is a defining trait of being strong and masculine, and so I think we’re all programmed – on some level – to desire this outcome.

And it’s a noble pursuit… but there are risks and dangers that come along when you relentlessly pursue the path of “getting big”. Some of these risks are physical – herniating a disk in your lower back during a set of deadlifts or straining your rotator cuff while bench pressing, for example.

But I believe the biggest risk is a mental one. Below is the story of my experience with “getting big” and the psychological costs I paid along the way.

My Story: How I Got Obsessed with Bodybuilding

I was introduced to weight lifting after my first year of college.

After a career as a high school athlete where daily practices kept me in shape, I let myself go my freshman year of college… I put on the “freshman 15”.

This left me weak and scrawny.

While visiting my cousin that summer, he took me through a few P90X workouts that left me so sore that I could barely move without being in intense pain. I thoroughly despised everything about lifting weights… And that was my introduction to weight lifting.

Things changed two years later when I was working at a software firm in Madrid while living in Spain.

I was placed in a cubicle next to an amateur bodybuilder, and his passion for lifting weights, counting calories, and building muscle got me extremely curious.

I was still rather “small” from my weight loss experimentation, and I soon began a specific weight lifting routine he recommended in hopes of putting on some size… Before long I was counting my calories – and the idea of missing a workout was already beginning to seem like the end of the world to me.

I spent my free time learning – and arguing – on the Bodybuilding.com forums, buying countless supplements, worrying about hitting my target calories for the day, and looking at myself in the mirror. Before you know it I started a blog on the subject (that eventually turned into this site), self-published a beginner’s guide to bodybuilding, and quit my job as a software engineer to become a personal trainer… 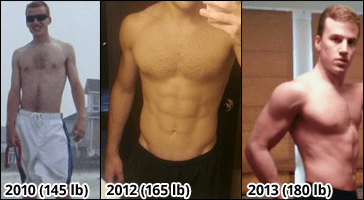 Some of my progress during my long “bulking” phase

As you can see: weight-lifting began to rule my life.

I’d rarely go out and drink on the weekends, because I was afraid the alcohol calories would throw off my caloric balance… Yet I stuffed tubs of Ben and Jerry’s ice cream down my throat before going to bed to make sure I consumed the 4000 calories I needed to put on weight.

And I did put on weight, hitting 190 pounds at my heaviest… But not without ruining my digestive tract and causing a whole host of issues I continue to deal with today.

But I digress… The main cost of this obsession was a mental one: I was hyper-focused on building muscle and other areas of my life were taking a hit. I wasn’t confident because I wasn’t “big” enough. My relationships took the back seat to my body. It was a fucking disaster…

And it only resolved itself when my gastrointestinal issues forced me to scale back my calories. At this point I slowly became more and more comfortable not looking like a fitness model – and just feeling strong and healthy.

What is Muscle Dysmorphia?

As defined by Wikipedia, muscle dysmorphia is:

A disorder that is characterized by a fear of being too small, and perceiving oneself as small and weak even when one is actually large and muscular.

In other words muscle dysmorphia – or “bigorexia” – is the condition of being obsessed with getting bigger, as motivated by a belief that you’re too small. And unfortunately it’s quite common among men in their teens, twenties, and even thirties.

It’s essentially the opposite of anorexia nervosa – the better known affliction suffered, usually by women, and defined by a constant belief that you’re not thin enough, and the poor eating habits that go along with this.

However, muscle dysmorphia gets considerably less attention for several reasons:

Muscle Dysmorphia Cripples the Self-Esteem of Many Men

The point of this article isn’t to offer a “cure” or “treatment” to muscle dysmorphia.

I’m not qualified to do that. I only escaped it’s grasp when extreme circumstances forced me to. I was forced to eat a calorically sparse diet and this distanced me from the issue, made me lose about 20 pounds (a lot of it muscle), and ultimately allowed me to see that I’d developed an unhealthy relationship with my body image… and likely an eating disorder, too.

During this period I refocused and re-assessed my goals – and their relative importance. While, to this day, I still strive to get bigger, leaner, and stronger, it’s far from the most important thing in my life. I put far more emphasis on building my business, building relationships, and maintaining a healthy body and digestive tract (the amount of gas, diarrhea, bloating, constipation, etc. I dealt with on a daily basis was sickening).

My only purpose in writing this article is to share my experiences and raise awareness.

Striving to build muscle is not “bad” – in fact, I firmly believe it’s something most men should do. It builds persistence, mental strength, and physical strength. The sheer amount of discipline I developed through tracking my gym progress, counting my calories, and never missing workouts has undoubtedly helped me in other areas of my life.

But I lost balance… And the amount of discipline it takes me today to track my progress in the gym, eat to support this habit, but also BE OKAY with missing workouts and not making consistent progress is even greater.

Getting stronger and building muscle is a mission all men should take, but it’s not one that should take control of your body and mind, and eat away at your self-esteem…