How to Make Working Out a Habit: 5 Fool-Proof Steps 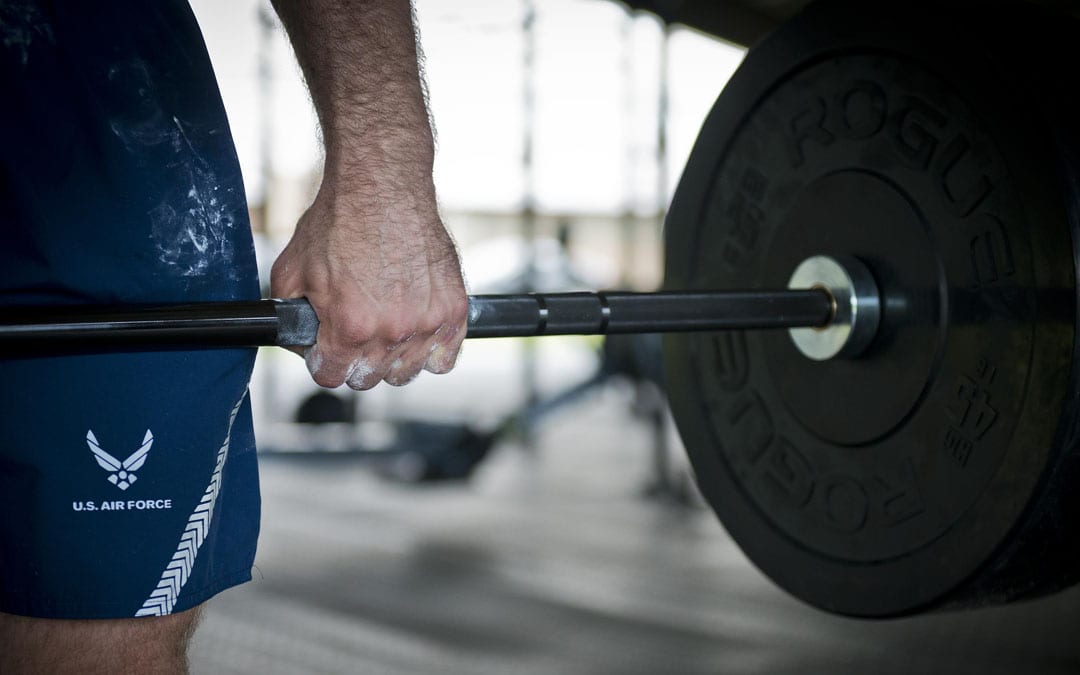 This is a guest post from my friend Sam Davies of SamuelThomasDavies.com. Sam is an expert on human psychology and always has awesome insights on how to use habits to improve your life.

We begin with the best intentions.

We join a gym, and chose a workout. We might even hire a personal trainer.

But before long, life gets in the way. We make excuses, skip workouts, and before long—we completely get off track completely.

According to Statistics Brain, losing weight is the number one New Year’s resolution people make (with getting fit close behind). [1]

I should know—I was part of that statistic. The truth is I struggled to build my exercise habit for years.

I would get into a good routine and be consistent with my workouts—only to miss a day or two, lose momentum, and then give up entirely.

That is until I researched the best principles for forming an exercise habit and built myself a system that allowed me to work out consistently, gain more muscle, and get in the best shape of my life.

And in today’s article, I’ll show you how you can, too.

Bonus: Download my Free Bulking Routine and get a proven step-by-step routine to quickly pack on mass in just 3 workouts per week.

Step #1: Identify Your Goal (and Why)

For change to occur, you need to identify, concretely, what you want to achieve.

Be specific. “I want to work out regularly” is ambiguous. “I want to go to the gym every Monday, Wednesday and Thursday between 8:00 and 10:00 a.m.” is actionable.

Why did the Wright brothers achieve the first powered, sustained and controlled airplane flight, when their competitor—Samuel Pierpont Langley—had better equipment, better funding, and better education?

Simple: they started with Why.

Ask yourself, “Why do I want to develop the habit of working out?”

Do you want to get a six-pack? Or build 20 pounds of muscle?

Your answer will often be superficial at first. That’s okay. But it probably won’t be enough to motivate you in the long-term.

Ultimately, you need a Why that will satisfy a value that’s important to you. This is known as a “core motivation”.

To identify your core motivation, you need to use what writer Stephen Guise calls a, “why drill.” [2]

A why drill invites you to ask yourself why you want what you want five times. 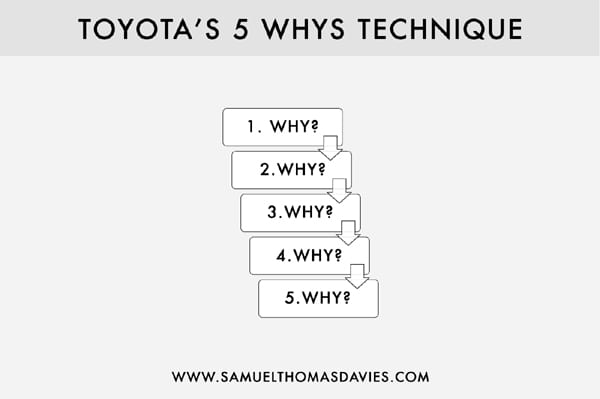 Asking why five times helps you identify your core motivation and helps you differentiate between what you think you want from what you really want (and probably need).

By the third or fifth why you should have your core motivation—the real reason you want to exercise.

When you know your Why, the how makes itself available to you.

Let’s look at each step in turn.

In his New York Times bestselling book, The Power of Habit, Charles Duhigg explains at the core of every habit is the same neurological loop called the habit loop. [3] 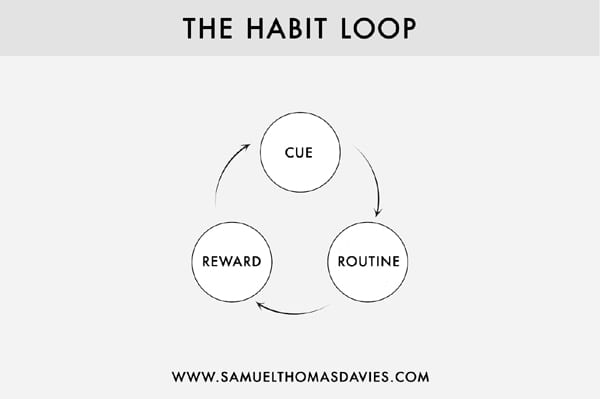 According to Duhigg, there are five types of triggers:

In my experience, an immediately preceding action is the most reliable trigger.

Because you can use an existing habit as a trigger.

Take waking up, for example. It’s a behavior you do every day. You never need to decide whether to wake up or not—you just do it.

When I was building my gym habit, I chose to use waking up for that very reason. I woke up, picked up my gym bag and went to the gym (more on that later).

Forgetting to introduce a reward is the most common reason people fail to build an exercise habit.

Instead, they will themselves to exercise. And as you know, willpower is a limited resource. The more we expend it on non-essential decision making—like when to go to the gym—the more likely we are to default on that behavior.

This is why creating systems is so crucial. With so much information competing for your attention, you want to conserve the little willpower you have for building better habits (at least, in the beginning).

Really, the habit is the reward, both in and of itself. But, often, that’s not enough to form a habit from the offset.

Here’s what Duhigg says about rewards:

Want to exercise more? Choose a cue, such as going to the gym as soon as you wake up, and a reward, such as a smoothie after each workout. Then think about that smoothie, or about the endorphin rush you’ll feel. Allow yourself to anticipate the reward. Eventually, that craving will make it easier to push throughout the gym doors every day.

I recommend, what I call, “reward bundling”.

This is when you combine an existing activity that’s rewarding with one that isn’t rewarding—yet.

Examples of reward bundling include:

Reward bundling is an opportunity for you to reward yourself for doing that habit, both, during and after the activity.

Anticipate your reward, and the habit will take care of itself.

Once you’ve identified a trigger and a reward, you need to put your plan into writing. Specifically, what to do and when to do it.

To do this, I recommend using what’s called an “implementation intention”. 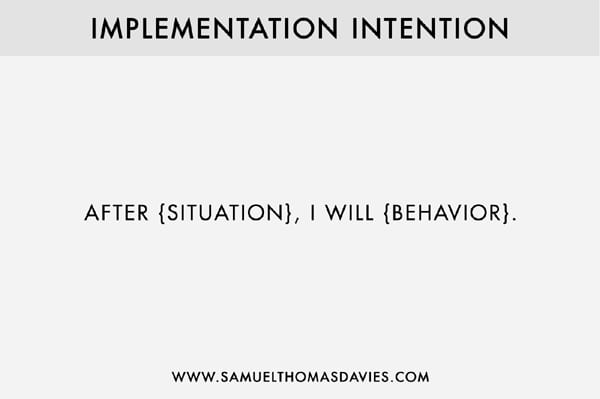 By writing an implementation intention, you’re freeing up your need to decide what to do and when to do it, and conserving your willpower for what matters most—building the habit of working out.

There’s a reason Shawn Achor finally built the habit of practicing guitar when he moved his guitar from his cupboard to the center of his living room—he simplified the behavior. [4]

In his own words:

Lowering the barrier to change by just 20 seconds was all it took to help me form a new habit.

Achor’s “20-second rule” is one of many examples of what’s known as “environment design.”

The idea is simple: by reducing the number of steps needed to do a behavior—like going to the gym—we make the behavior simpler and therefore easier to do.

One of the best examples of environment design, in an exercise context, is from Ramit Sethi.

When Ramit decided he wanted to put on muscle, he packed his bag the night before and placed his workout shoes by his bed so he’d trip over them when he woke up. This not only served as an additional trigger—it was one less barrier to overcome.

Think about how you can redesign your environment.

Can you pack your gym bag the night before? Plan your workout in advance? Chose a gym that’s closer to your home or work?

Sometimes, all it takes is one small tipping point to trigger a big breakthrough.

Bonus: I’ve put all of the exercises in this article into a concise worksheet for you to use. Get access to the free action plan workbook here.

Tracking your progress is crucial when building an exercise habit.

You need to know whether you’re moving closer or further away from your goal.

As travel photographer James Clear writes, “The things we measure are the things we improve.”

You might decide to track the amount of weight you lift during a workout, the number of days you go to the gym, etc. Ideally, choose a metric that is closest to your goal.

My goal was to put on more muscle. By tracking my body weight and the amount of weight I was lifting, I was able to measure if I was going up in weight and getting stronger.

One way to track your metrics is to play small, addictive games.

In his book, The Little Book of Talent, Daniel Coyle discovered that people who become experts in their field think differently about practice. They are the ones who embrace repetition and fall in love with the process. [5]

The governing rule is this: if you can count it, it can be turned into a game.

For example, when I was counting calories, I saw my total daily energy expenditure (TDEE) as a “score” I needed to break. This made eating more less stressful and more enjoyable.

Count the things that matter and you’ll arrive at your goal a lot sooner that you expect.

Step #5: Focus on a Ritual Rather Than a Result

After achieving a goal, many people fall back into their old patterns

Their lives momentarily lose meaning. That very thing that they were moving toward is gone. And in its place is a void.

The truth is, the goal—losing weight, getting fit, putting on muscle—isn’t the goal at all.

The real goal is building a ritual.

A ritual you won’t want to live without once you’ve achieved your goal.

Yes, having a result in mind is important, of course, but what’s more important is building a ritual that will allow you to continue progress once you’ve accomplished what you want.

When you build a ritual of showing up and doing the work, consistently, the result becomes a natural byproduct of your hard work.

…But Remember: Exercise is a Choice

I’ll leave you with this: most people look at working out as something they have to do. But the truth is it’s something you get to do.

Ultimately: exercise is a choice.

And you can choose to do it now.

This was a guest post from Sam Thomas Davies. Check out this blog at SamuelThomasDavies.com.